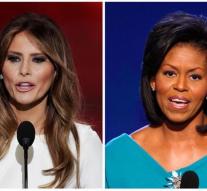 cleveland - A speech writer of the Trump Organization, the business of the Republican presidential candidate Donald Trump has admitted being responsible for inserting passages in the speech of Trump's wife Melania at the Republican National Convention Monday night. The passages, which led to commotion Tuesday, resembled parts of a speech by First Lady Michelle Obama in 2008.

The woman, Meredith McIver, gave Wednesday a statement in which she apologized for the use of these passages. She said Melania Trump she had read during a phone call, but she had not checked to see how much they resembled Obama's speech at the Democratic National Convention eight years ago.