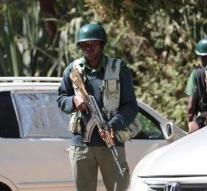 yaounde - The security services in Cameroon have been guilty of torture practices against people suspected of ties with the Islamic terrorist group Boko Haram. Amnesty International, who released a report on Thursday, claims that several prisoners between 2013 and 2017 died.

The torture, including waterboarding, was found on a military basis, according to the human rights organization, which is also used by the American and French army. Also, suspects were detained without evidence. Amnesty International speaks of at least 101 cases involving torture and imprisonment, in which all contact with the outside world was remembered. Among the victims are women and children.

The battle between Cameroon and Boko Haram has cost lives to about 1,500 citizens. The terrorist organization from Nigeria has been associated with Islamic State since 2014.