Home / World / Cameron promises wish to put on the table 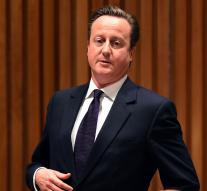 brussels - Britain will soon make clear what it wants exactly is different in the status of the country within the European Union. British Prime Minister David Cameron said Thursday ahead of a summit in Brussels between political leaders of the EU that the pace of negotiations on British membership of the union intensified.

" The pace will speed up now and I will set out the four areas we like to change things to see ", said Cameron . He added , " early November, " just make clear what changes to be exact. Cameron cited the ongoing technical discussions " successful ". He is convinced a " good deal " to close for Britain and " to fix things that need to be repaired ".

Cameron has promised Britons a referendum on membership of the country in the EU. Before then renegotiates the prime minister about the membership .