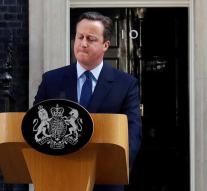 london - British Prime Minister David Cameron will make a new referendum on British membership of the European Union. It reports the newspaper The Independent on Monday.

The spokesman for Cameron said the holding of a new referendum,, remotely is '' not on the map. Cameron's comment comes a petition for a new referendum get a lot of signatures. The proponents of finding a new referendum by a majority of at least 60 percent is needed if the turnout is below 75 percent.


spent 72 percent of Britons a vote in the referendum on a brexit. Thursday spoke 'only' 52 percent of the 46.5 million registered voters in favor of leaving the EU.