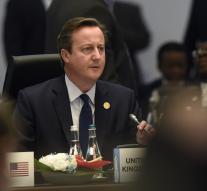 london - British Prime Minister David Cameron said Monday that his country also needs to bombard targets in Syria. Cameron stressed that following the terrorist attacks Friday in Paris. Which are claimed by the Sunni extremists of Islamic State (IS).

An international coalition of Western and Arab countries falls positions of IS from the air in Iraq and Syria. Britain is like the Netherlands alone targets in Iraq because Baghdad has expressly requested. Cameron tried unsuccessfully in 2013 to get permission from the parliament also bombarding targets in Syria.