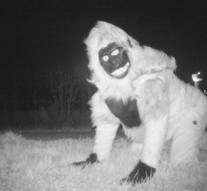 gardner - Cameras with motion censor who had to capture cougars in a nature reserve in the US state of Kansas, appear to have filmed only people in animal suits.

Earlier this month Reports came in that cougars were living in the area. The authorities therefore decided to hang two cameras, hoping to film the animals.

That was different: the video showed people last week in gorilla and lion suits and even a costumed Santa Claus. The images can be seen include how the pranksters simulating a fight between two lions.

Police Officer Robert Huff laugh palatable to the jokers and says that they will not be penalized. 'Pretty funny and creative,' he told US media.