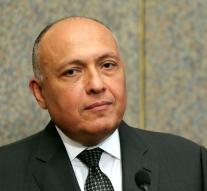 - Other countries did not respond to the call of Egypt to strengthen cooperation in the fight against terrorism. That said Sameh Shoukry, the Egyptian Minister of Foreign Affairs Saturday.

He also said that Egypt has not received information from foreign intelligence about a possible bomb aboard a Russian plane that crashed last week. " What we've heard about is not shared in detail with the Egyptian security ", said Shoukry. The British intelligence services say they have evidence that it is a bomb. US intelligence officials have stated to have conversations intercepted IS supporters warning of " something big in the area ". Would members of IS in Egypt talked with leaders in Syria over the downing of flight.
NEW