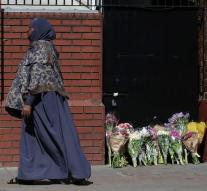 amsterdam - The Moroccan Mosque Council of the Netherlands (RMMN) calls Muslims to keep calm after the attack with a van at a mosque in London.

'We ask the Dutch Muslim community to keep her head cool and not to provoke it. That's exactly what terrorists want. They will only stop if society is broken apart. We will not let that happen, 'says the board.

There is contact between the National Coordinator of Terrorism and Security (NCTV) and the mosque dome. The NCTV monitors the situation. Dutch mosque governments must also be alert and consult the safety regulations. 'For the big mosques in the Randstad, it is good to see how roadblocks are, and it is also good to intensify contact with the district agent,' said the board.