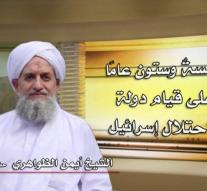 baghdad - Sunnis in Iraq should always be reduced further to prepare for a prolonged guerrilla now Islamic State by the Iraqi army and its allies. That al-Qaeda leader Ayman al-Zawahiri said Thursday.

The movement of al-Baghdadi increasingly losing ground in Iraq. The government in Baghdad is preparing an offensive in Mosul, the de facto capital of IS in Iraq. According to Al-Zawahiri, the government will use the IS extremism as a pretext to murder Sunnis en masse.

,, The Sunnis of Iraq must not surrender if their towns fall into the hands of the Shiite Safavid army '', a reference to the army of the Shiite-led government.,, Instead, they should organize themselves for a protracted guerrilla warfare to defeat the Crusaders Safawid. ''


IS split in 2014 from al-Qaida. Al-Zawahiri considers too extreme terror movement of Abu Bakr al-Baghdadi. Al-Baghdadi admits, in turn, not the authority of al-Zawahiri.