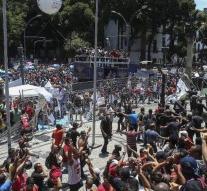 - Dozens of protesters on Wednesday disrupted a session of the Brazilian parliament. They rushed in and shouted slogans against corruption and demanded military intervention in the country. She also sang the national anthem, Brazilian media reported.

The Brazilian economy and politics for quite some time plagued by one of the biggest corruption scandals ever. In addition, political leaders and leading figures from business and state enterprises for years on a large scale money to the economy withdrawn for a system for paying bribes.