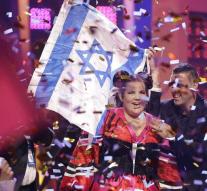 - Dozens of European artists oppose organizing the Eurovision Song Contest in Israel. The reason for their call for a boycott is the violation of human rights against Palestinians.

The signers of the open letter in the British newspaper The Guardian include Roger Waters, co-founder of Pink Floyd, and British filmmaker Ken Loach. Both are known as pro-Palestinian activists. The directors Aki Kaurismäki and Mike Leigh, actress Julie Christie and multi-instrumentalist and producer Brian Eno also support the protest action, as well as six Israeli artists.

The Israeli singer Netta won the Eurovision Song Contest in May in Portugal with the song Toy. This gave Israel the right to organize the 2019 edition. In her victory she said: 'Next year in Jerusalem'