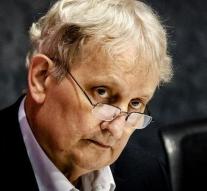 amsterdam - A 'deafening applause' for Eberhard van der Laan. The Facebook page Applause for Eber \u003c3 wants to ensure that as many people as possible gather on Wednesday night for the office of the Mayor of Amsterdam. Almost a thousand people have indicated to come. More than five thousand people are interested.

Monday afternoon Eberhard announced his duties as mayor next to him. In a farewell letter to the Amsterdammers, he informed him that he was being treated and that he had reported ill to the Commissioner of the King.

In the letter he thanked the Amsterdammers for their support and trust. 'It was a great privilege to be the mayor of the most beautiful and dearest city in the world. 'He concluded the letter with:' Take care of our city and for each other. Goodbye '

'We want to get back to this beautiful man, our burgher. To honor him, we will organize a daunting, deafening, massive applause on Wednesday, September 20, at the office. A big applause for Van der Laan, 'writes the Facebook page Applaus for Eber \u0026 lt; 3. Wednesday evening at 20:00 is gathering at the office.