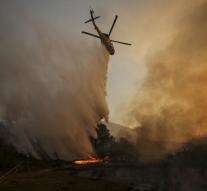 - The fires north of Los Angeles have expanded. According to the fire department have so far destroyed eighteen houses, 1500 people had to leave their homes and blocked several roads are. The flames near Santa Clarita spread quickly in the arid landscape by the extreme heat and strong winds, the LA Times reported Monday.

The fire is now more than 13 000 hectares of land went up in flames. More than 1,600 firefighters were deployed to fight the fire. Over large parts of Los Angeles was a cloud of smoke.