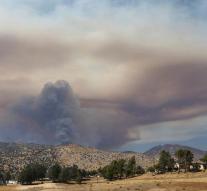 - A wildfire in a mountain pass in the southern US state of California has put about a hundred homes in ashes. Tens of thousands of people were forced to seek refuge. Since the fire broke out in the so-called Blue Cut Tuesday, nearly 15,000 hectares of bone-dry scrub went up in flames.

Friday firefighters finally got a grip on the conflagration in the region 120 kilometers northeast of Los Angeles. Yet still 34 500 houses and other buildings which threatened the resort Wrightwood.

Also in other states in the western US wildfires rage. In areas has long been little precipitation cases and rule unusually high temperatures. While the wind blows hard.