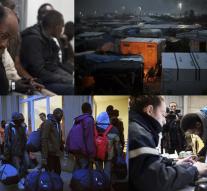 - In the French port of Calais is Tuesday the second day of the evacuation of the refugee camp in the jungle. Authorities transported Monday nearly two thousand people by bus to various official shelters in the country. Registration and carriage went quiet.

And an estimated 1 250 police officers and gendarmes present around the camp. Which did not have to get into action until now. Once the jungle is cleared, the camp is broken down completely.

Now stay still about 4,500 people in the camp and in sheds on Monday with sleeping spots were appointed. Also Wednesday dozens of buses are still used to bring out the refugees.

Aid agencies have warned that will eventually remain an unruly group of illegal refugees who will not leave voluntarily. It's about people who necessarily want to Great Britain. The British took until now only a few hundred children, some of whom were reunited in England with their parents.