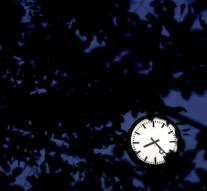 strasbourg - The government must report to Brussels no later than March next year whether the Netherlands will switch to permanent summer or winter time in 2019. The European Commission is putting an end to the half-yearly clocking in the EU, said President Jean-Claude Juncker in his annual policy speech.

EU countries must first give their approval to the planned deletion of the summer-time regulation, as well as the European Parliament. According to Juncker, there is insufficient social support for the half-yearly clock ritual. Member States must choose a standard time. In order not to disrupt the functioning of the internal market, the countries are no longer allowed to enter seasonal times on their own.

The Dutch cabinet will make a decision on the plan within a few weeks.