Home / World / Cabinet: Arab countries to do more against IS 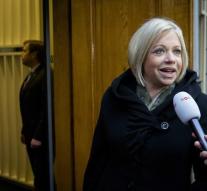 - Arab countries need to do much more according to the government in the fight against terror group Islamic State (IS). That said Minister Jeanine Hennis- Plasschaert of Defense Tuesday during question time in the Lower House.

,null, The efforts need to be genuinely strengthened considerably to be a credible partner in the fight against IS '' said the minister. US Secretary of Defense recently declared in Congress that does not bombard the Saudis in Syria.The Saudis made ​​this week the formation of an Islamic military alliance of 34 countries in combating terrorism known. Here is possible to certain risks, Hennis said to questions from D66. It must according to its tensions between Sunnis (like the Saudis) and Shiites (Iran) not allow further increase. It should also be a means to deal with political opponents.The Chamber is very critical of Saudi Arabia, including on human rights in the country, its military action in neighboring Yemen and the spread of radical Islamic ideology. Among others D66 and SP calling for an arms embargo against that country. The government feels nothing for it.
NEW