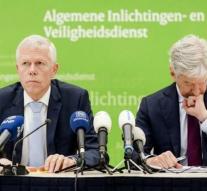 - The Cabinet on Friday approved the new law on intelligence and security which allows large amounts of Internet traffic interception via cable. According to the government, the law is needed to provide the services to carry out their duties properly.

Intelligence will be able to data centers, for example, e-mail, text messaging, Internet phone and apps handle structurally monitor. Thus, it may be decided to drain all the telephone traffic between Syria and the Netherlands, for example, to detect Foreign rebel fighters in the Syrian Civil War. Data may be kept for three years. Also, the exchange of data with other intelligence arranged.

The plan to give the intelligence agencies more powers has worked for years. The old law of 2002. Technological developments which did not. The bulk of the information, such as telephony, internet and email, now runs through the cable.

The new law has been widely criticized. But according responsible minister Ronald Plasterk (Interior) there is a good balance between privacy and security. The intelligence can not decide on your own. Before the new powers are used, permission from the Minister and a special commission, the Review Stake Powers (TIB).

TIB see if tapping is necessary for national security and that the invasion of privacy in proportion to the seriousness of the threat. The supervisor of the intelligence CTIVD checking afterwards whether the decisions have been correct.