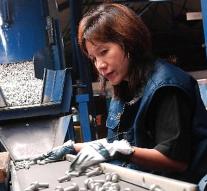 - Interventions in credits to Chinese companies are noticeable: in Europe, the number of acquisitions is shrinking.

This is evidenced by an overview of company adviser and accountant EY who reports De Tijd on Wednesday.

In the Netherlands, Nedschroef previously bought in Chinese hands, just like football club ADO The Hague, bought by Vansen.

Since then, European policy has been criticized for the acquisition of strategic industrial companies, such as Eandis, gas and electricity network operator, and robot maker Kuka for € 4.5 billion.

The number of acquisitions returns to a 'normal' level over the longer term, according to EY. Chinese companies are on the radar, but, according to this adviser, they are more likely to decide which acquisitions are the most renowned.