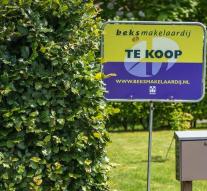 the hague - Buying houses were 7.6 percent higher in July than one year earlier.

This increase is less significant than in May and June when the price increase was 7.8 and 8 percent respectively, according to figures from the Statistics Netherlands (CBS) and the Kadaster. House prices have risen since June 2013.

House prices are still more than 6 percent lower than at the highest level in August 2008. In June 2013, a drop was reached and since then prices rose by 19.5 percent on average. This means that prices are now about the same level as in January 2007.