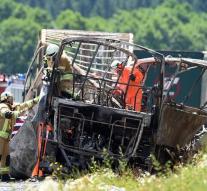 munchberg - The traffic accident started at the southern German Münchberg last month, causing eighteen people to travel, caused by inattention by the driver. That said the law and the traffic police in Germany declared Wednesday.

The bus with mostly seniors bumped on the A9 on the back of a truck and flew on fire. The passengers were most retired holidaymakers aged 66 to 81 years old from east Germany who were on their way to Italy.

The fire shortly after the blow was caused by short circuiting in the battery. The sparks flared through fire, causing the vehicle to be in light shutter in a very short space of time.