Home / World / Bush with Air Force One back to Washington 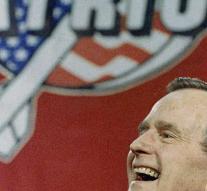 washington - The US presidential plane Air Force One will pick up the body of former George Bush senior (94), who died on Friday, in Houston and bring him to Washington. President Donald Trump, who first flies back on Saturday night with the Boeing 747 from the G20 summit in the Argentine capital Buenos Aires, calls it 'a special tribute.'

From Monday, Bush's body is being laid out in the Capitol, the seat of the Senate. In the afternoon at 17.00 local time there is a commemoration meeting for senators and members of the House of Representatives. Then citizens can say goodbye to the former statesman, who is buried on that day.

Trump has declared Wednesday to national mourning. The flags on the White House, on government buildings and army bases will also be at half-mast for 30 days.