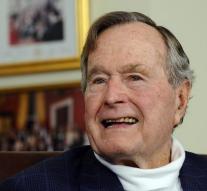 houston - George H. W. Bush responds well to medical treatment. 'Doctors and welcome his recovery involved and we hope he will soon leave the hospital,' a spokesperson of the family Wednesday.

The 92-year-old Bush, the oldest living former US president, is since this weekend in the hospital with respiratory problems.

Bush Sr. is the father of former President George W. Bush and former Florida Governor Jeb Bush, who made a bid last year to the Republican candidacy for the US presidency.

The old Bush, like his sons, a Republican, was vice-president during the two terms that Ronald Reagan was in the White House. In 1988 he was himself elected president.

Bush is in a wheelchair, and has been previously admitted to the hospital. In 2014, with pneumonia and shortly afterwards with respiratory problems. In July 2015 he broke a bone in his neck after he had fallen.