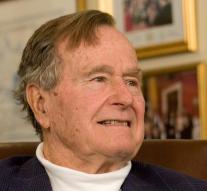 houston - Former President George H. W. Bush (92) on Monday left the hospital in Houston. He lay there for over two weeks with pneumonia.

'He is grateful for the many prayers and kind messages he has received during his stay and for the fantastic care who gave his doctors and nurses,' said a spokesman.

Bush was recorded on January 14 with respiratory problems. His wife Barbara (91) was treated in hospital in the same week for bronchitis. She was sacked last week.

On 6 January, the couple married 72 years.