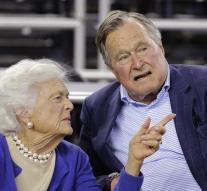 houston - Former US President George H. W. Bush recovers slowly. He was allowed Monday to leave the intensive care unit of a hospital in Houston.

Bush sitting upright and watching television. ' He is a very strong person, '' said a doctor. The doctors expect that Bush a few days to stay in the hospital. His wife Barbara on Monday discharged from hospital.

Bush is since last Saturday in Houston Methodist Hospital. He had difficulty breathing due to pneumonia. Barbara (91) Wednesday in the same hospital was admitted with complaints of cough and fatigue. She had bronchitis.