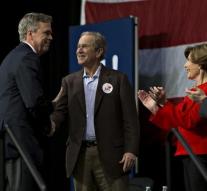 charleston - George W. Bush on Monday (local time) his brother Jeb came to the rescue. During a speech in the US state of South Carolina, the former president praised his younger brother, which significantly lags behind in the polls.

Jeb Bush wants to participate in the presidential elections on behalf of the Republicans, but is heading for a fourth place in the election in the state. His rivals Donald Trump, Ted Cruz and Marco Rubio in the polls seem to get more voters behind him.

The 69-year-old George W. Bush pulled out in his speech among other things, to Donald Trump, the billionaire without mentioning by name. He stressed that the country does not need a president who strengthens the anger and frustration among the population.

,, The strongest person is usually not the loudest person in the room, '' the former president kept his listeners for. The question is whether Jeb can benefit from the help of his older brother. George W. Bush is very popular with some Republicans, but he also formed the basis of the controversial Iraq War.