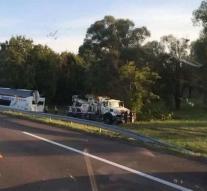 beaune - A bus from the Dutch tour operator Solmar is Tuesday night still touched by unknown cause of the road. The coach, who was en route from France to the Netherlands were 47 passengers and two drivers. One person was slightly injured.

It is a Dutch girl who had after the accident bother her leg. She was taken for inspection to a hospital in France. The other passengers have resigned in other buses touring operator and can arrive anytime in the Netherlands.

\'They are obviously very shocked,\' says a spokesman for Solmar against De Telegraaf. \'So we will be there for them when they arrive. We would really like to know how it goes with the passengers.\'

The company spokesman could not say how the accident could have happened. According to him, is currently investigating the cause.