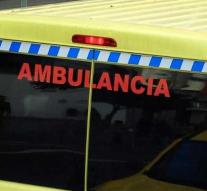 aviles - In a traffic accident with a bus in the north of Spain, at least six people were killed and about 25 wounded. The bus crashed on a motorway in Avilés where roadworks were taking place, in a pillar of a viaduct, local media reported.

The bus is completely twisted by the blow. The accident was not far from the coast of the Asturias region, about 400 kilometers northwest of Madrid.