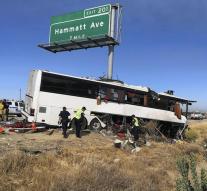 sacramento - Horrifying images of a bus crash in California. A tour bus rammed at an exit a large pile under a road, causing the bus for nearly three quarters lengthwise in half was split. In the accident were certainly regrettable five dead and several wounded. There would have put thirty passengers in the bus.

The accident happened on State Route 99, between the towns of Atwater and Livingstone. On aerial images shows how the post should have cut through the bus. It appears that the bus is hit at high speed on the road.