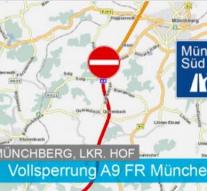 munchberg - A coach has collided with a truck on the A9 in Duistland and then completely burned out. There have been 31 people injured, some of which are serious. Still seventeen people are missing.

That is what the German police reported to Bild. According to the German authorities' first announcement, the bus was heading south from Nuremberg.

The A9 at Stammbach is completely blocked in the southern direction. Auxiliary services, including multiple helicopters, block the road.

In the bus there were two drivers and 46 passengers.