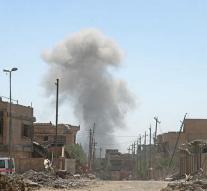 mosul - By a robbery of Islamic state, seven civilians were killed on Thursday. They were attacked when they tried to flee the Iraqi city of Mosul. Another 23 others were injured.

According to local authorities, the attack took place in Zanjili, a district in Mosul that still has the terrorist group. The Iraqi forces started offensive last week to recapture the last occupied districts in the city. In addition, citizens were called upon to leave the areas concerned. IS grips hard on Thursday.

The injured citizens have been brought to a field hospital, according to the police. They were part of the first group who dared to flee. A large part of the fugitives managed to reach the safe areas, in the hands of the government.