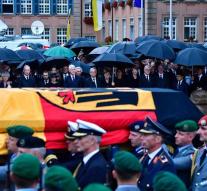 speyer - With a musical ceremony on the Domplein, the German town of Speyer, Saturday night ended the public ceremonies around the funeral of German statesman Helmut Kohl.

The Bundeswehr music corps played after the funeral in the cathedral of the old city, among other things, a mourning march. Kohl's German-flagged coffin was on the square during military and musical farewell. Kohl is buried in a closed circle at the cemetery of the church.

The Christian Democrat Kohl ruled the Federal Republic as Chancellor from 1982 to 1998. He was a convinced European and was honored earlier in the European Parliament by many (former) world leaders on Saturday. The coffin was under the European flag. He is the first to be honored with a special European funeral ceremony. He passed away June 16 at the age of 87.