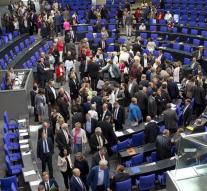 berlin - The German parliament approved Wednesday's transfer of German soldiers who are still living in Turkey. The approximately 260 men and several aircraft are moving because of a diplomatic conflict of the Turkish air force base Incirlik to Jordan.

The majority of parliamentarians in the Federal Day supported the decision: 461 representatives voted against, 85 against. The government strictly does not need parliamentary permission to transfer the troops. Indeed, the mandate for the mission was not where the military would be hosted.

Ankara and Berlin have been for some time over the German soldiers. The Turkish authorities repeatedly did not grant German parliamentarians permission to visit their own troops, who were in Turkey because of the battle against the Islamic State terrorist group.

Relations between both NATO countries have been tense since Germany gave asylum to Turkish officers accusing Ankara of being a member of the Gülen movement. According to the Turkish government, that movement was behind the failed coup in July last year.