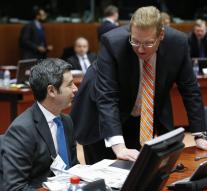 rome - The Italian Minister of Justice Thursday received a threatening letter. 'We come to Rome and cut your head off. Allah is great,' it said. The envelope also contained two bullets for a Kalashnikov. The letter to Minister Andrea Orlando was signed by 'Isis'.

The letter, the bullets and the envelope are brought for laboratory testing. It is the first time that the minister and his ministry as endangered, a spokeswoman announced Thursday.