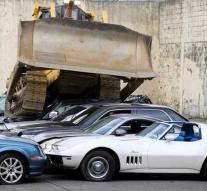 manila - Thirty luxurious cars that turn into scrap heaps in no time. Under the watchful eye of the Philippine president Rodrigo Duterte, a bulldozer drove the smuggled goods on Tuesday. The action counts as Dutert's latest striking measure in the fight against corruption.

Among the destroyed cars were some nice models: a Lexus ES300, BMW Alpina, BMW Z4 and an Audi A6 Quattro. Duterte warned that from now on every illegally imported car will suffer the same fate.