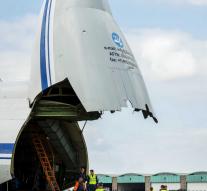 - Bulgaria again has a Russian plane with humanitarian aid for Syria refused access to its airspace. Russia had not applied for permission at the time, said the Bulgarian Foreign Ministry Friday .

" We have refused access because the legal rules are not followed . We received a request for a scheduled flight on Friday , in the afternoon of October 14th. Such a request must be submitted at least five days in advance ", said a spokeswoman.

The former Eastern bloc country in early September had already closed its airspace for Russian aid flights to Syria. The transport aircraft had to bring humanitarian supplies to Syria. Sofia but doubted whether it actually just did that type of operation.