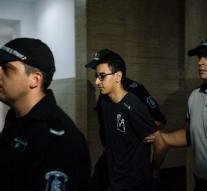 - Bulgaria provides a relative of one of the bombers on the satirical magazine Charlie Hebdo in France in Paris last year. The delivery follows a Bulgarian court ruling on Tuesday.

Mourad Hamyd who is a French national and a brother of striker Cherif Kouachi, last month was arrested in Bulgaria. A court in Paris had a European arrest warrant issued against him. Hamyd is suspected of having wanted to join terrorist group Islamic State.

During a court hearing last week the twenty Hamyd denied the allegations, but said he wanted to be extradited to France immediately given the way he was treated in Bulgarian custody. Prosecutors denied any wrongdoing and said he was treated like any other prisoner.


Hamyd came on July 26 by train from Serbia to Bulgaria, in their own words for holidays. He was arrested two days later after he was sent back to the Turkish border because of a five-year re-entry ban.

He was earlier questioned by French police following the attack on Charlie Hebdo in January 2015. Kouachi Cherif and his brother Said shots while twelve people dead before himself being slain by the police. Hamyd, according to the police not involved in the attack.