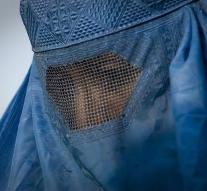 - Face-covering clothing has been banned in Bulgaria. Who even longer wear a burqa or other facial covering, must fear a fine of a few hundred euros or a discount on his or her benefit.

The burqa ban, as the measure is called in the vernacular, was a pet peeve of the small nationalist ruling party Patriotic Front. The measure would be needed to provide the threat of Islamic inspired terrorism head. Many burqas are not in the Bulgarian streets, though the country has quite a large Muslim minority of Turkish origin in particular.

The political party of the Turkish minority, the DPS, the burqa ban mentions ' initiated by people who are hostile to strangers. ' After the approval of the parliament with the measure DPS members left the hall.

A similar ban is already several years in force including the Netherlands and Belgium.