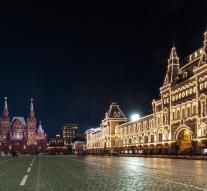 moscow - The Russian authorities evacuated several dozens of buildings in Moscow on Wednesday following a series of anonymous phone calls.

On the site of the company it was stated that 'for technical reasons' was temporarily closed. A Reuters cameraman said the police went in with detective dogs. That also happened in over twenty other properties.

Russia is flooded this week by a wave of bombings. So far, they have all been fake. According to RIA, it has not been limited to Moscow or St. Petersburg but has more than twenty Russian cities affected. The Kremlin did not respond to the alarming phone call, but referred to the press representatives to the police.

RIA conducted a source saying that many calls were likely to come from Ukraine. The relationship between Kiev and Moscow is on a low pit since the Russians annexed the Crimea in 2014.