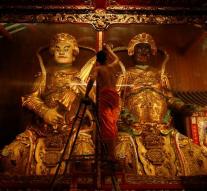 rangoon - In a Buddhist monastery in Myanmar are four million methamphetamine pills were found. A monk is associated with the party drug representing a street value of at least 7.5 million.

The police find the trail came when the car of the man 400 000 pills were found. The monk, named in local media Arsara, was on his way to the border with Bangladesh. In the local community of Maungdaw, he is a familiar figure.

Myanmar is one of the largest methamphetamine-producers in the world. In the poorer parts of the country drug trafficking is a growing problem. Also, opium and cannabis are popular merchandise.