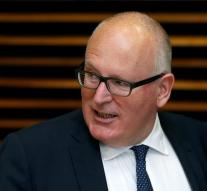 brussels - EU Commissioner Frans Timmermans Poland three months is the time to review the controversial reform of the Constitutional Court. The three unelected judges, appointed by the new right-wing government, can not perform their duties which Brussels regards. The European Commission also argues that the Polish government of Prime Minister Beata Szydlo all judgments of the court automatically public.

Timmermans threaten the reforms Szydlo's Law and Justice party (PiS) has made the rule of law in Poland, because the government interferes with the composition and powers of the court.

In May Timmermans still traveled to Warsaw to talk to Szydlo on the issue. Late last month agreed parliament reform.


If Poland ignores the warning, Brussels may decide to suspend the Polish vote in the EU.