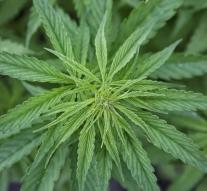 brussels - Synthetic party drugs like Black Mamba or Spice have claimed the lives of at least 29 users in the EU since 2014. The European Commission proposes Wednesday for an end to the advance of according to specialists' strongest weed in the world. '

Brussels wants Member States to take additional control for psychoactive drugs under the official name MDMB-CHMICA and keep each other informed. EU Commissioner Dimitris Avramopoulos (Interior):,, The number and types continue to increase dangerous new drugs in the EU and its distribution is not to fight at the national level. 'The drugs come mostly from China.

A joint report by Europol and the European Monitoring Centre for Drugs and Drug Addiction (EMCDDA) last month shows that cheap designer drugs also lead to dozens of hospitalizations. The drugs are very popular in Germany and England.