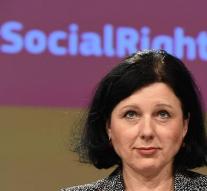 brussels - It is unacceptable that foods of the same brand and with the same packaging in Eastern European countries are of lower quality than in Western Europe. 'I am determined to put an end to this practice under EU law, and to ensure that all consumers are treated equally,' said EU Commissioner Vera Jourova (Justice and Consumer Rights). She wants consumers to no longer be 'misled.'

Countries like Slovakia and the Czech Republic complain that there are less fish in fish sticks sold in their country, or less cocoa in chocolate products. They spoke of 'food parity. 'For example, coffee and detergent could sometimes be of lesser quality.

The European Commission has made a guide that allows national supervisors to check whether EU legislation is being violated. In order to get the facts above the table, the committee is also working on a method of improving comparative tests. 1 million euro is available for this purpose. The same amount will be released for studies and enforcement actions.

Food manufacturers argue that they do not violate rules and only adapt their products to local tastes. They have promised in discussions with the committee to come up with a code of conduct this autumn. Commission President Jean-Claude Juncker said earlier this month that there are no 'second-rate consumers' in the EU.

Slovakia and the Czech Republic will organize a ministerial meeting in Bratislava on 13 October on the differences in food quality.