Home / World / Brussels licks wounds one year after the attacks 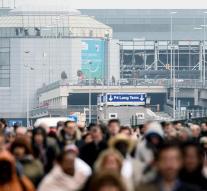 brussels - Brussels licking a year after the terrorist attacks of March 22, 2016 are still wounds. Victims and survivors complain about the lack of financial and practical follow-up since three suicide bombers Tuesday morning seventeen fifteen Belgians and foreigners drove into the death. Brussels scrambles with difficulty from the downturn after tourists flocking the city avoided last year. Soldiers are not always disappeared from the scene and recall the persistent threat of terrorism.

Belgium Wednesday commemorates the black day in addition to the 35 dead, counting the terrorists, more than three hundred people were injured. Returned Syriëstrijders first struck at Zaventem airport and over an hour later in Maelbeek Metro Station. And the commemoration will take place in that order, at exactly the same time as the attacks of time.

Survivors and relatives from home and abroad, political and other official representatives and King Philippe and Queen Mathilde hold twice a minute's silence. At 7. 58 pm, the time when Ibrahim El Bakraoui and 9 seconds later, Najim Laachraoui the massacres in the departure hall. And more than an hour later, at 9. 11 pm, when El Bakroui's brother Khalid blew himself up in a subway car at Maelbeek station, in the heart of the European district.

Meanwhile, the investigation continues into the terror cells, which were also in the attack in Paris in November 2015 concerned. Weapons or explosives have never been found, despite numerous searches which dozens of people were arrested and released. Two key players were arrested in Brussels for April last year, judiciary does not seem to have become much wiser. It involves Abrini Mohammed and Osama Krayem. The first, known as the 'man with the hat', was recorded at Zaventem on camera image when he fled shortly after the attack. His bomb had not gone off. The second had run away from the subway station where his friend Khalid El Bakroui have walked out. At home, he rinsed his bomb.

The good news is that no more jihadists to Syria over the past year have left Molenbeek, Brussels municipality which is called the heart of the Belgian Muslim terror.