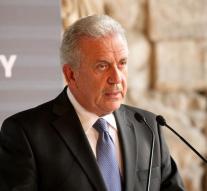 brussels - The European Commission sees no reason to worry about the Hungarian referendum on the mandatory inclusion of refugees. ' Hungary is a very mature democracy, '' said EU Commissioner Dimitris Avramopoulos (Migration) Wednesday. ' We do not worry if a referendum is held. ''

About eight million Hungarians Sunday to express their views on mandatory quotas for asylum in Europe. They get asked whether the EU should impose even without the consent of the Hungarian Parliament. Avramopoulos said to assume that the referendum is the future distribution mechanism.

When the EU countries decided last year to redistribute to 160. 000 asylum seekers from Greece and Italy, Hungary was against, but the country was drowned. The obligation is therefore in Hungary, although it still has to bring over any asylum seeker. Hungary and Slovakia have stepped to the European Court of Justice to challenge the decision redistribution.