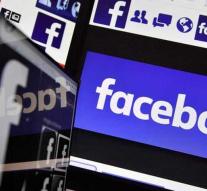 - Facebook and Twitter do not offer their users the protection that the consumer authorities in the European Union require from social media platforms. Issues such as liability and informing users when removing inappropriate messages are still not in order in the amended terms of use, warns the European Commission.

EU Commissioner Vera Jourova (Justice and Consumer Rights) and the national consumer watchdogs had told American companies a year ago to bring their terms of use into line with European rules. Jourova thinks it is 'unacceptable' that they take so much time. 'EU consumer rules must be respected and if companies do not comply they should be punished. '' That is a matter for the Member States. Google+ seems to meet the requirements.

Many users have complained about fraud and scams as a result of their use of social media. In a number of cases, the terms of use of US companies did not include liability, or users were forced to renounce their rights. That has now improved, but it is still insufficient. Plus is that consumers with complaints that can now submit in Europe, and no longer in California.

In January, it turned out that Twitter, Facebook, YouTube and Microsoft are getting hate-sowing messages from their platforms faster and faster, as they had agreed with the European Commission in a code of conduct. Within 24 hours, on average more than 70 percent of reports of racist, extremist or discriminatory content will be removed. Jourova already said that the feedback to users whose messages are being deleted still leaves much to be desired.