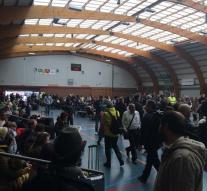 zaventem - They had other plans for the day then evacuated to the sports hall of Zaventem. Yet it was this morning where hundreds of stranded airline passengers had to make a forced stopover. They could process the first blow.

In the case of the Liege Anne Bernard was almost fatal. With her husband and dog Sabi she stood at the counter of SN Brussels. One of the two targets of the terrorists. Anne'm sure Sabi saved her life, because as she and her husband, the dog had, they were not allowed to check in at the usual counter, but had to go to a counter away. Exactly when they were there were loud bangs.

,, There were three and they were so hard, 'says the Walloon.,, My husband got pieces of the ceiling on his head. No, fortunately he is not injured. We're going to run, stumbling to a safe place. I've fallen, someone has fallen over me. We came out with a kitchen. We have been to people from the police or the airport, which I do not really know anymore, shouted that we had to go outside. '

Mr. Bernard gets nearly four hours after it happened is still almost no word from his mouth. He holds the bag with the trembling dog Sabi between his feet. Family is called to retrieve the elderly couple. Their car is stuck in the car park which is within the safety corridor. Anne Bernard can to make themselves busy.,, We want only to our safe house in the countryside. '

The sports hall is a wonderful mix of people. Ladies in traditional African robes to Asians in full regalia and European tourists gepokte gemazelde and business travelers. Ton van den Broek from Breda is one of them. He had already checked in for the Ryan Air flight to Barcelona when the call came to evacuate. It went according Brabander all remarkably calmly and without panic. After an hour he was finally on the load platform of DHL. Once among so many fellow travelers penetrates only by what's happened and how close he was.,, The idea that you have just walked there; it is sickening, 'Van den Broek says, shaking his head.

jumps one group really out in the middle of the municipal sports center. They are Edward and his colleagues from Barcelona. They would sit on the same flight as Ton van den Broek. While the left and right about delay grumbled pulling Edward and his mates a few Belgian beers open. Bought for home, but on a day like today, a drink will not hurt. Eduard cheers with his Duveltje towards a skylight where the sun shines through.,, We should be very happy that we are still here. '