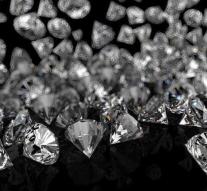 brussels - The lawsuit about the high-profile diamond robbery at Brussels Airport in 2013 will start on Wednesday. In the raid in Zaventem by at least eight armed and masked men, the perpetrators went off with 37 million of diamonds from a Swiss airline.

The Public Prosecution Service brings nineteen suspects to court in Brussels. It concerns sixteen men and three women, all of whom live in Belgium except for one man. The suspected main suspect, Marc Bertoldi, is not in the process. He is in a French cell for a kidnapping and can not be transferred to Belgium.

Nine suspects stand trial for complicity in the robbery and arson of the vehicles used during the operation. Others are suspected of receiving part of the loot and laundering. According to the Public Prosecutor, eighteen persons were members of a criminal organization.