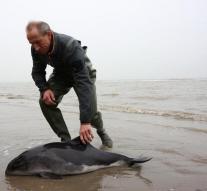 brussels - Porpoises in British waters receive support from Brussels. The European Commission is taking the UK government to the European Court of Justice because they continue to do little to protect this mammal, found in the North Sea but also in many ports in the United Kingdom.

London attracts, despite repeated warnings from Brussels, nothing of a regulation which regulates the protection of wild animals. States are obliged protected zones for certain species, including the porpoise, organize.

The commission is not satisfied with the designated two areas, one in Northern Ireland and in Scotland, the government so far for the porpoises. Thirteen other EU countries doing enough to protect the Phocoena phocoena, says Brussels.