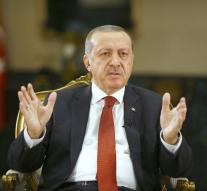 brussels - The EU is deeply,, worried 'about the state of emergency in Turkey and the far-reaching power that President Recep Erdogan himself has appropriated by decree.

In a statement Thursday in response,, the unacceptable decisions relating to education, justice and the media call 'EU foreign policy chief Frederica Mogherini and Commissioner Johannes Hahn (Extension) Erdogan strongly in itself,, under any circumstance' to respect the rules of democracy and human rights.

,, Earlier, Erdogan said that the measures in no way would undermine the rule of law and fundamental freedoms, 'according to the statement.,, We expect to be fully respected. '


Both point out that the temporary suspension of the European Convention is bound for the Protection of Human Rights rules.